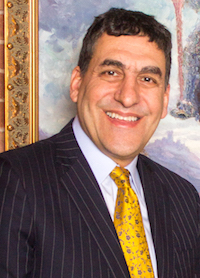 Bernard D’Orazio is a native New Yorker who has lived in New York City for 40 years. He served for eight years as an appointed member of Manhattan Community Board No. 1, which participates in City planning processes and other issues facing lower Manhattan. He was for many years a member of the Board of Managers of his 261-unit condominium building located in the Tribeca neighborhood in Manhattan and also served as its President. Mr. D’Orazio is a Public Member of the Business Conduct Committee (formerly known as the Adjudication Committee) of The CME Group, which operates the NYMEX/COMEX Commodities exchanges in New York City. His interests include history, music, sports, film, travel, all things concerning fabulous Upstate New York, and his family. He writes on topics of New York City history for The Tribeca Tribune, a community newspaper.

Mr. D’Orazio is a regular lecturer on judgment enforcement for the New York City Bar Association. He also writes articles on debt collection issues that have appeared in the New York Law Journal, New York’ daily legal newspaper. Most recently, he was appointed Editor of West Publishing’s on-line guide for practicing lawyers, Practical Law, on the topic of New York Judgment Enforcement